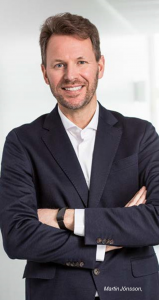 The third quarter of 2022 was yet another successful and active period for AlzeCure. We presented positive results from our Phase I study with ACD856, intended for treatment of Alzheimer’s disease, with good safety and tolerability data as well as brain activity data, which support continued clinical development work. In addition, we presented new preclinical data in the TrkA-NAM pain project, where we showed that the compounds demonstrate not only analgesic, but also anti-inflammatory effects. Our goal – to deliver results in the summer of 2023 from our ongoing Phase IIa clinical trial with ACD440 for the treatment of neuropathic pain – remains.

In the third quarter, we presented positive Phase I clinical data for our leading drug candidate, ACD856, which is part of the innovative NeuroRestore platform. The primary focus is on the treatment of Alzheimer’s disease, with the purpose of improving learning and memory impairment and other cognitive problems. The results, which were presented at the world-leading Alzheimer’s Association International Conference (AAIC) in San Diego at the end of July, showed good safety and tolerability. It is particularly gratifying that we delivered these data at a point when we are seeing increased interest in projects in the field of Alzheimer’s, which strengthens our ongoing out-licensing efforts. Results from the study also show that the substance activates neuronal pathways in the brain in ways that are considered central to the indications that we aim to treat.

We also presented positive data showing that ACD856 crosses the blood-brain barrier and can be measured in the spinal fluid, which means that the drug reaches the brain – the organ it intends to affect. Over 37 percent of the free, active substance crossed the blood-brain barrier, which can be compared with biologics such as antibodies, where only 0.1-0.2 percent pass.

In addition, we presented new NeuroRestore data indicating that ACD856 improves both mitochondrial function and cellular health, while protecting neurons from damage. These findings further strengthen the likelihood that the compound may have a disease- modifying effect and could potentially be used for additional indications where these mechanisms are central, which theoretically increases the value of the project.

The positive and noteworthy findings presented during the quarter regarding the antibody lecanemab, which is being jointly developed by Eisai, Biogen and Bioarctic, are extremely important for the entire field of Alzheimer’s research and validate the amyloid hypothesis, on which AlzeCure’s Alzstatin research platform is also based. During the spring, we presented new favorable preclinical data regarding Alzstatin, with the aim of developing preventive and disease-modifying treatments for Alzheimer’s disease. AlzeCure’s data stem from a new series of molecules that are expected to be advantageous from a patent perspective. The findings showed that a molecule from the series can reduce harmful amyloid-beta levels by 50 to 60 percent, which is extremely promising.

Leading researchers are now showing growing interest in gamma- secretase modulators, such as Alzstatin, as potentially important treatments for Alzheimer’s patients. Naturally, this trend is positive for our business development work with Alzstatin since only a few companies publicly state that they are conducting active gamma-secretase modulator projects. With multiple preclinical compounds under evaluation, we can ensure that we have the best possible drug candidate when we move into clinical trials.

We also see promising progress in our pain platform, Painless, with the ACD440 and TrkA-NAM projects. ACD440 is a TRPV1 antagonist for topical use aimed at treating peripheral neuropathic pain. The project is based on discoveries that were awarded by the Nobel Prize in Physiology or Medicine in 2021. The groundbreaking discovery of TRPV1 and its link to pain perception is of great significance and we have used it in our ACD440 clinical program. During Martin Jönsson, CEO 3 ALZECURE PHARMA | INTERIM REPORT JANUARY–SEPTEMBER 2022 INTRODUCTION the previous quarter, we started the company’s first Phase II trial with ACD440 in patients with peripheral neuropathic pain. The conclusion of the Phase IIa clinical trial is planned for the first half of 2023 and we expect to receive the study results in the summer of that same year. The study is based in part on feedback from the FDA regarding documentation we submitted for a pre-IND meeting earlier this year.

Drugs for the treatment of neuropathic pain represent the single largest market for pain relievers, with sales of over USD 11 billion (GlobalData 2021). Nevertheless, as many as 80 percent of patients with neuropathic pain currently do not achieve adequate pain relief. Moreover, many of these patients are prescribed opioids in the US, which the authorities there want to prevent. Taken together, these circumstances indicate a great unmet medical need and thus the potential for our ACD440 project.

The company’s second pain project, TrkA-NAM, which focuses on arthritis of the knee, also continues to make good progress. Even though the project is in the early stages, it has drawn the attention of several external parties with whom we have regular meetings. During the quarter, we presented new data indicating that TrkANAM not only has an analgesic effect, but also anti-inflammatory properties. We presented these findings at IASP, the world’s largest pain congress, in September. The anti-inflammatory effect of TrkA-NAM is positive for pain relief, which is expected to generate further external interest in the project. This benefits our business development and paves the way for potential new indications.

During the quarter we continued to have a strong focus on marketing communication and participated in several meetings and conferences, both in Sweden and abroad. We are constantly working on reaching out to both private and institutional investors, as well as other pharmaceutical and research companies that may be interested in investing in or in-licensing our development projects, or alternatively in entering into a partnership.

As part of enabling an accelerated development of our drug candidates, the Board of Directors has decided to perform a preferential rights issue with strong support of our principal owners and management. Their support means that we can cost-effectively continue to create great value in our research portfolio and intensify business development in the company.

With this financial contribution, the company plans to work towards fulfilling the following goals in 2023:

We hope that we will have the opportunity to meet as many of you shareholders as possible at the Extraordinary General Meeting on November 29, and that you will also continue to support AlzeCure’s continued development.

I remain pleased and proud to report that AlzeCure continues to make good progress thanks to our talented and ambitious employees and collaboration partners. We have several promising projects under development within fields of great unmet medical need, which is incredibly satisfying and motivating. I consider the accelerating interest in both AlzeCure and the field of Alzheimer’s as confirmation that we are on the right path. I continue to be confident about the future, proud that AlzeCure is developing according to plan into a Phase II company, which demonstrates the competence and capability of the organization.