In Alzheimer’s disease, the nerve cells cease functioning as they should, which leads to a deterioration of memory and learning. AlzeCure has identified drug-like compounds that stimulate neurotrophic signaling pathways, thereby strengthening nerve cell function and improving memory.

NeuroRestore is a platform of symptomatic drug candidates for diseases where cognitive ability is impaired, such as Alzheimer’s.

NeuroRestore stimulates several important signal pathways in the brain, which among other things leads to improved cognition. In preclinical studies with NeuroRestore, we have been able to demonstrate that our drug compounds not only boost communication between nerve cells but also improve cognitive ability.
The drug candidates in NeuroRestore stimulate signaling of neurotrophins, the most well-known of which is Nerve Growth Factor (NGF) and Brain Derived Neurotrophic Factor (BDNF). These neurotrophins are important for maintaining nerve cell function and communication, which are impaired with cognitive disorders. BDNF plays an important role for nerve cell function and communication in the areas of the brain that are essential for our cognitive ability, such as the hippocampus, located in the temporal lobe.
In addition, special “cholinergic neurons” in the basal forebrain depend on NGF to maintain their biological function, but also to survive. Loss of cholinergic neurons in the basal forebrain, as well as dysfunction of normal neuron function and communication in the hippocampus, are early signs of Alzheimer’s and correlate with cognitive impairment. The drug candidates in the NeuroRestore platform strengthen the signaling of these two important neurotrophins, which results in improved memory and learning – something that AlzeCure has been able to demonstrate in several different preclinical models.

The levels of NGF and BDNF are disrupted in many diseases and signaling is reduced. This reduced function impairs both communication between the contact surfaces at nerve ends and the function in neurons, which gives rise to cognitive impairment.
There is also genetic support for this target mechanism – a genetic variation of BDNF in humans, leading to a reduction in BDNF secretion, is involved in cognitive impairment related to both neurodegenerative processes seen in Alzheimer’s and Parkinson’s disease, but also in other cognitive indications such as traumatic brain injury and sleep disorders. AlzeCure also considers there to be a potential for adding further indications based on the specific target mechanism. Based on the specific target mechanism for NeuroRestore, there is also a potential for disease-modifying effects with these substances, i.e. that the underlying disease process is affected by the treatment. This as both the neurotrophins NGF and BDNF play important roles in maintaining normal function and development of nerve cells, but also to protect them from damage, so-called neuroprotective effects. Nerve cell death is clearly correlated to functional impairment in Alzheimer’s patients and there are currently no marketed drugs with these protective effects.

This area has received an increased focus in the company during 2022 and new preclinical data within the NeuroRestore platform that will be presented at the ISMND conference in September 2022 shows, among other things, positive effects on mitochondrial function, something that is disturbed in neurodegenerative diseases such as Alzheimer’s. These preclinical studies also seem to indicate that substance treatment leads to increased survival for the nerve cells. Furthermore, the substances themselves can also increase the release of BDNF, something that can be of importance not only for neurodegenerative diseases such as Alzheimer’s, but also for diseases such as traumatic brain injury and depression. Further work to map these potentially disease-modifying effects will continue in the fall and winter of 2022. There is also strong scientific support for this target mechanism in depression.

NeuoRestore compounds have demonstrated efficacy in preclinical models for depression, which has been further supported by data in a recently published article in the highly respected publication Cell1.In the preclinical trials, ACD856, the leading drug candidate in the NeuroRestore platform, has been able to demonstrate that it can strengthen signaling in the intended pathway and improve cognitive ability. Among other things, the compound has been able to show that it can reverse age-induced memory impairment and strengthen the effect of existing drugs (acetylcholinesterase inhibitors), which AlzeCure views as a competitive advantage.

Within NeuroRestore, a new generation of symptom-relieving drugs is being developed for the treatment of cognitive dysfunction (memory disorders) in Alzheimer’s. The company initiated the first clinical study with the primary drug candidate in NeuroRestore, ACD856, at the end of 2019. The study was completed during the second quarter of 2020 according to plan. The results showed that ACD856 was well suited for further clinical development and thus further clinical studies could be initiated at the end of 2020, the so-called SAD study, also according to plan. The MAD study was also initiated in the third quarter of 2021, and these two studies, which are part of the Phase 1 program for the drug candidate, have as their primary purpose to evaluate its safety and tolerability in humans.

The MAD study, which was completed according to plan in June 2022, showed that ACD856 has a good tolerability and safety profile in humans. Furthermore, the results demonstrated that the substance had suitable pharmacokinetic properties with rapid uptake into the body, but also that ACD856 crosses the blood-brain barrier well and can be measured in the spinal fluid, which is important data that supports the further clinical development work. ACD857 is in the research phase and also has cognitive dysfunction / Alzheimer’s disease as the primary indication. New preclinical data within the NeuroRestore platform presented in January 2022 also show positive effects on mitochondrial function, something that is disrupted in neurodegenerative diseases such as Alzheimer’s.

The video below briefly shows how a compound from the NeuroRestore program acts in the brain.

AlzeCure’s primary drug candidates within NeuroRestore – ACD856 and ACD857 – act as BDNF/NGF signaling enhancers. The biological mechanism that the compounds affect enable their use in several different diseases in which the same signal pathway is disrupted.
These indications include:

The figure below shows the expected growth in the number of cases of dementia between 2015 and 2050. The largest increase in number of cases of dementia and Alzheimer’s is expected to accur in low and medium income countries (LMIC), since these countries are expected to demonstrate a higher relative improvement in quality of life than high-income countries (HIC), which leads to an increased life expectancy. The need for treatment continues to be very high since there are currently no satisfactory treatment options for such patients. 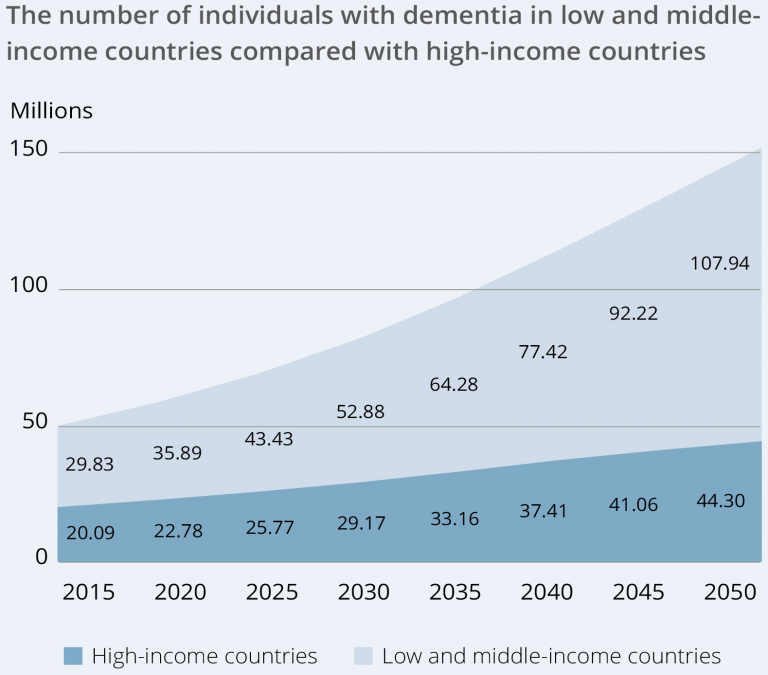