Our disease-modifying research platform, Alzstatin, consisting of disease-modifying and preventive drug candidates, focuses on reducing the production of toxic amyloid beta (Aβ) in the brain. Aβ plays a key pathogenic role in Alzheimer’s and begins to accumulate in the brain years before clear symptoms develop.

The brain consists of about 100 billion nerve cells (neurons) that are interconnected in an intricate network and are vital for brain function and survival. Autopsies of the brains of Alzheimer’s patients show abundant amounts of amyloid (Aβ) plaques, the accumulation of which is assessed to have a major impact on the course of disease.

Aβ plaques consist of an accumulation of Aβ peptides, which are formed and secreted by nerve cells in the brain. Aβ is a family consisting of 30–43 building blocks (Aβ30 – Aβ43); Of these building blocks, Aβ42 is the main component in Aβ plaque. Aβ42 is particularly “sticky” and has a strong tendency to form clumps. This process is complex and the Aβ peptide accumulates in smaller aggregates, oligomers and protofibrils, which then form the building blocks of fibrils that form Aβ plaques. 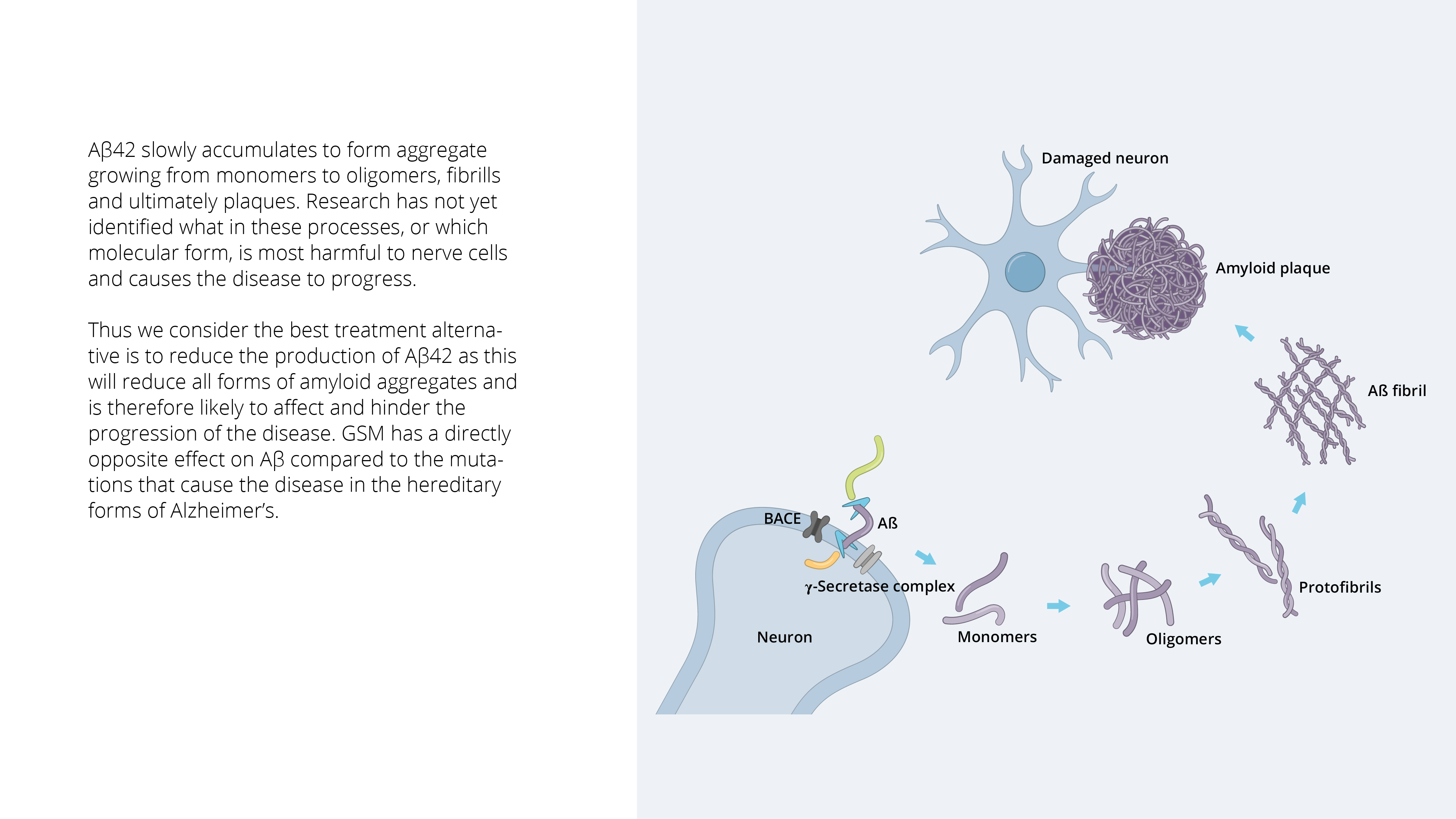 In Alzheimer’s disease, the nerve cells are surrounded by these Aβ aggregates, which affects the communication ability and function of the nerve cells, which in turn leads to them withering and eventually dying. Exactly how Aβ causes nerve cells to die at the molecular level is not yet known. Much of the data suggest that the ill health of the nerve cells leads to accumulations of another protein, tau, inside the cells and that taken together, this leads to the death of the cells. A clear hereditary connection can be seen in about 1 percent of all Alzheimer’s cases. The heredity component involves specific mutations in any of three specific genes, all of which are directly involved in Aβ peptide production.

The common denominator among all these mutations is that they affect the Aβ peptide itself, or its production (relatively more Aβ42), in a way that accelerates build-up of Aβ plaques, thereby demonstrating the central role that Aβ plays in Alzheimer’s, while making this peptide and the amyloid process the most validated disease process in Alzheimer’s today. Major advances in research during the 2000s have made it possible to follow the amyloid process in living individuals over time.

A large number of such studies have shown that Aβ plaques begin to accumulate up to 20 years before symptoms appear and that it more or less reaches its peak and decreases in further growth once the symptoms of the disease begin to become apparent. When clinical symptoms occur, the structure of the brain has begun to change because of diseased nerve cells that have contracted and nerve cells that have died. The brain has literally begun to decrease in size. Several previous clinical trials with Aβ-targeted drugs in patients with relatively advanced Alzheimer’s have failed. Given the new knowledge about how early Aβ builds up and is stored in the brain, it is likely that these candidates were tested too late in the disease, during a phase when Aβ had already played most of its pathogenic role. New clinical studies in the field, in which Aβ-targeted drugs have been administered earlier in the course of disease, have been able to demonstrate clinical efficacy in patients, thereby strengthening the validity of this target mechanism.

It is clear that Aβ-amyloidosis is a causative agent of hereditary familial Alzheimer’s disease, as described above. More and more comparative studies, where the Aβ process in sporadic Alzheimer’s has been compared with familial Alzheimer’s, show a similar structure of Aβ in sporadic disease, though it usually occurs later in life. These research data strongly suggest that Aβ accumulation also plays a crucial pathological role in sporadic Alzheimer’s, which accounts for about 99 percent of cases in Alzheimer’s disease.
The drug candidates in the Alzstatin platform are “gamma- secretase modulators” (GSM) and affect the function of the enzyme gamma secretase. Gamma secretase acts like a pair of scissors and snips Aβ42 out from a longer protein known as APP.

The sticky Aβ42 peptide, which over time forms clumps of so-called oligomers and fibrils that ultimately form the amyloid plaques in the brain so characteristic of Alzheimer’s. Mutations in gamma secretase that lead to a relative increase in Aβ42 peptide is the cause of hereditary Alzheimer’s disease. This demonstrates the role of Aβ42 in the progression of the disease and is, together with mutations in the Aβ-peptide itself, the strongest known genetic link to Alzheimer’s disease.

The candidates in the Alzstatin platform affect enzyme function so that it instead snips out shorter forms of the Aβ peptide, Aβ37 and Aβ38, which in addition to their not being sticky and not forming aggregates, may also have a restrictive effect on the formation of Aβ42 aggregates. This means the drug candidates in the Alzstatin platform have two separate but synergistic effects that together contribute to a stronger anti-amyloidogenic – and thus more potent – disease-modifying effect.

The program also benefits from a drug based on small molecules, which enables oral administration (tablets), low production costs and good penetration of the blood-brain barrier. We have shown in preclinical tests that the modulation of gamma secretase leads to a reduction of up to 50 percent in the production of Alzheimer-related Aβ42 without affecting other signaling important for cells. The project is further confirmed by positive findings made in the recently published clinical patient studies with BAN2401, Aducanumab, Donanemab and Lecanemab/BAN2401, which we believe validate the amyloid hypothesis as a treatable and clinically relevant pathological mechanism. Major advances have also been made in the field of diagnostics with new blood-based tests, providing a cost-effective means of screening high-risk populations and thus identifying the right patients in the presymptomatic phase of the disease for upcoming clinical studies and future treatments.

The leading drug candidates within Alzstatin, ACD679 and ACD680, is currently in the preclinical development phase. The parallel development of two molecules is to ensure that the company has the best compound for clinical studies. The program is also differentiated by a drug based on small molecules, which enables oral administration (tablets), low production costs and good penetration of the blood-brain barrier.

The video below briefly shows how a compound from the Alzstatin program acts in the brain. 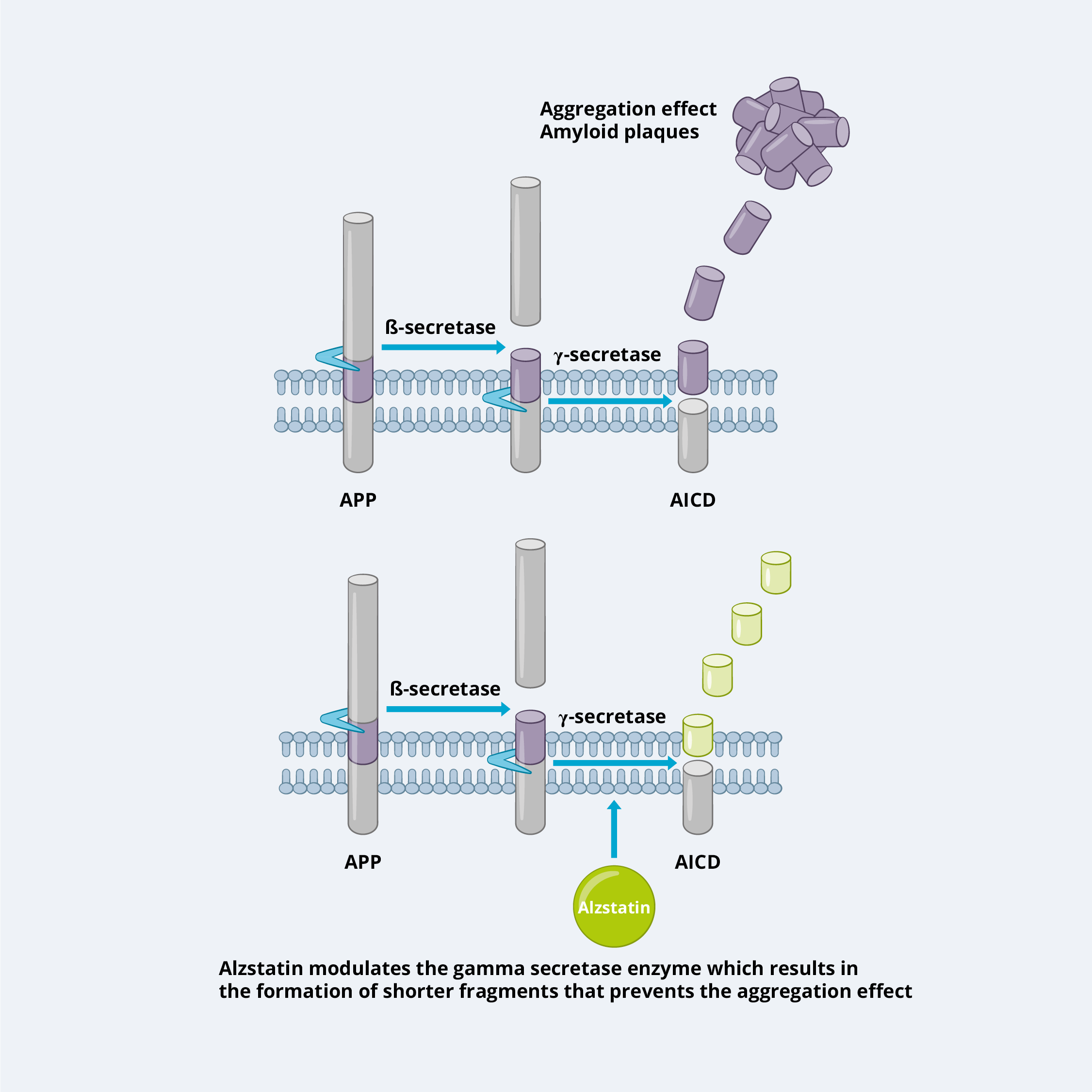