The NeuroRestore platform is a new generation of symptomatic drugs for the treatment of illnesses with cognitive disorders, such as Alzheimer’s disease. The target mechanism also has other potential indications, including depression and cognitive disorders in Parkinson’s disease, traumatic brain injury and sleep disorders.
Innovative small molecule disease-modifying and preventive drugs for Alzheimer’s disease are under development within the Alzstatin platform. They are intended to enable simple administration of the drug and be more cost-effective.

The Painless platform includes two projects: TrkA-NAM and ACD440, which both focus on severe pain. 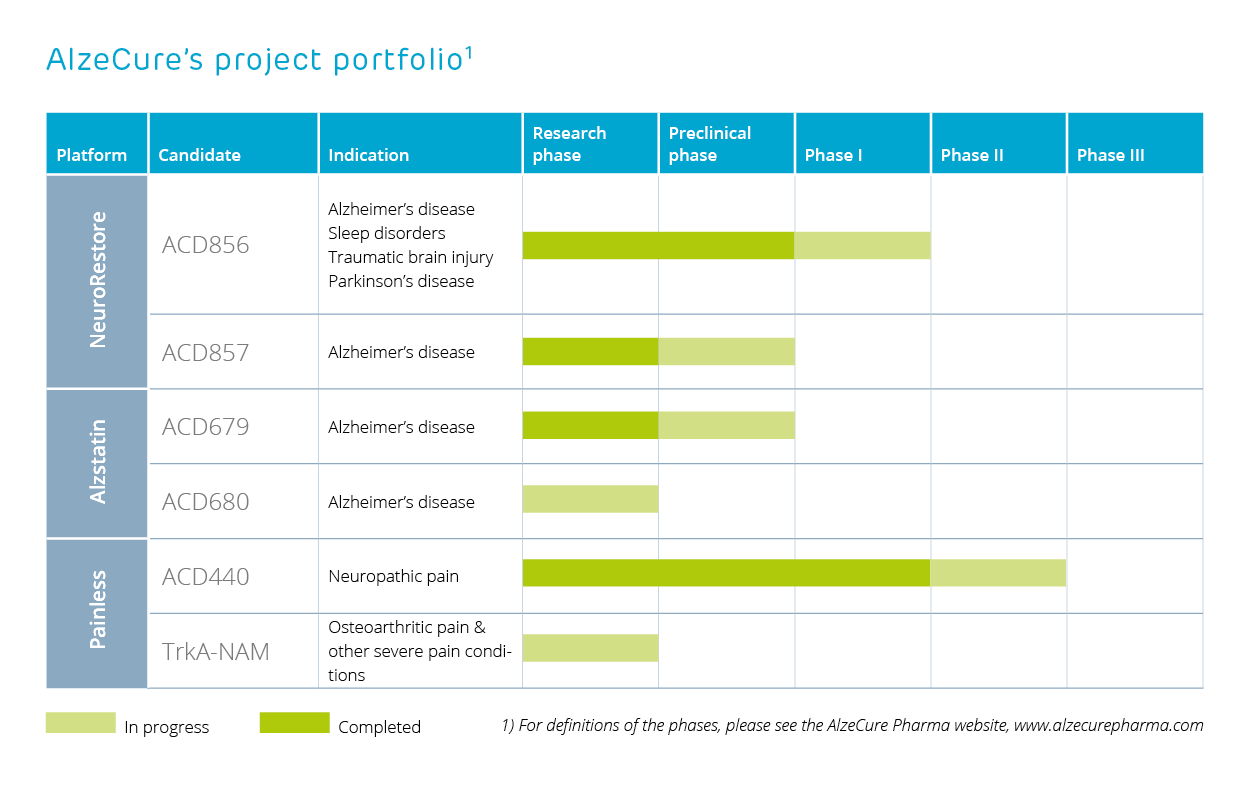 Research phase: Preclinical discovery and optimization phase. In this phase, potential new drug candidates are synthesized, and their chemical and biological properties are assessed in various in vitro and in vivo test systems. This includes testing of pharmacological effects, pharmacological versus toxicological dose levels, different administration methods and translation to humans.

Clinical Phase I: During Phase I, the drug candidate is tested and evaluated from a safety and tolerability perspective, usually in a smaller group of healthy volunteers. The focus from a regulatory perspective is to assess the safety profile, dose levels, how the substance is absorbed, degraded in the body and excreted, as well as evaluating possible interactions with other drugs and food.

Clinical Phase II: In Phase II, the drug candidate is given to patients with the disease to be treated. A primary aim of this clinical phase is to measure efficacy in a relevant patient population, but also to provide additional information on tolerability in the patient population. During this phase, preclinical studies are also being conducted to assess the possibility of giving the drug to pregnant women and children. The intended final formulation for the market is developed.

Clinical Phase III: The aim of Phase III clinical studies is to measure efficacy in a larger patient population with the relevant disease. In Phase III, the efficacy and safety of the drug candidate is confirmed in a patient group that, as far as possible, mimics the population in which the finished drug is to be used, with regard to weight, age, gender, etc. A comparison is made with the current standard treatment of care, or placebo if no standard treatment is available for the disease in question.